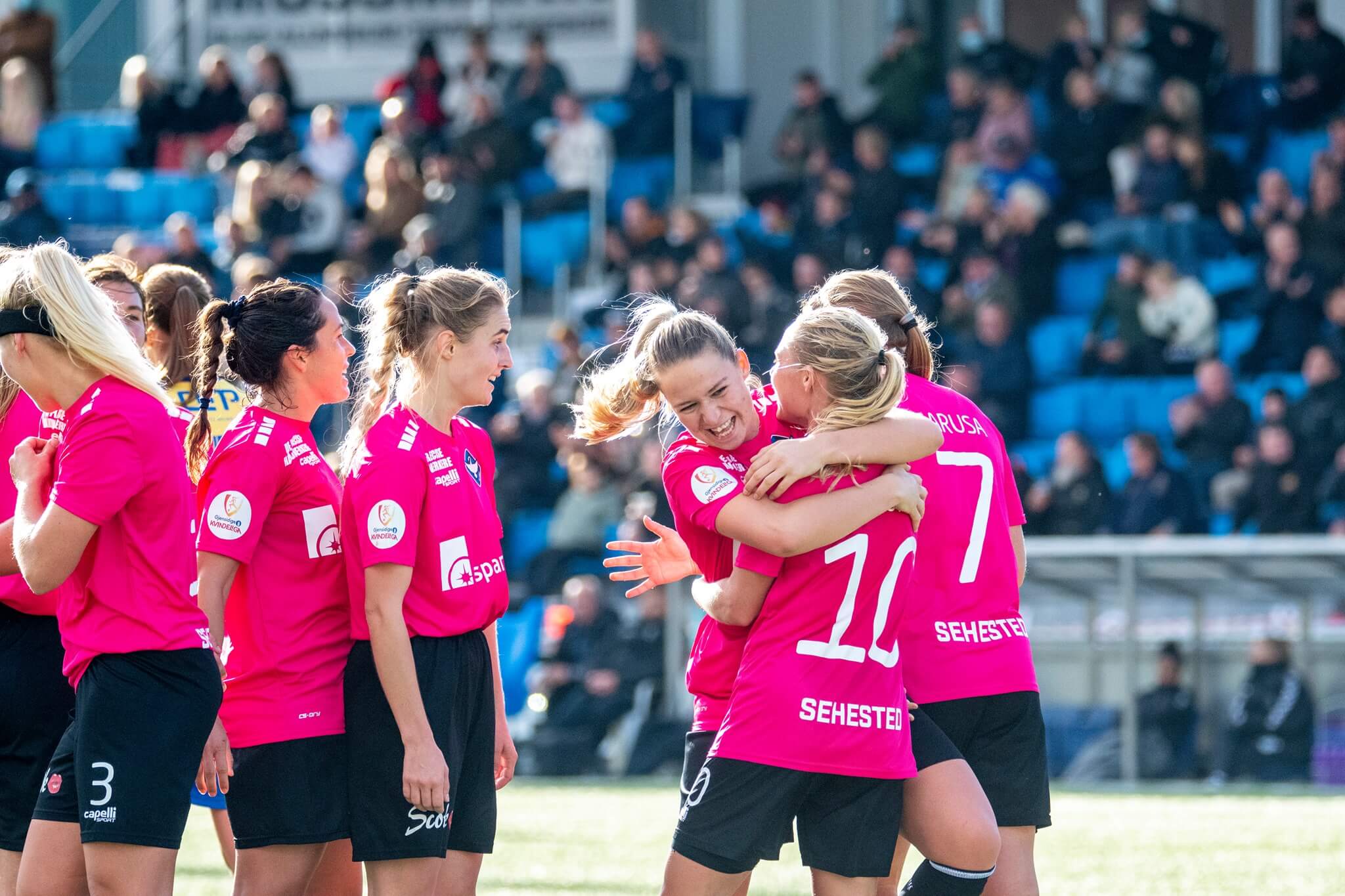 The Swans make a statement with 5-0 home win

“That’s the way I like it” – The smashing 1975 hit from KC and the Sunshine Band is typically played after each HB Køge goal at Capelli Sport Stadium. On Sunday afternoon, 500 people could hear this song playing not once, not twice but five times as the sun gradually went down over the beautiful turf in the center of Køge.

This was all due to HB Køge Women’s team thrashing the title favorites from Brøndby IF – with twelve championships this millennium, several national team players and Champions League successes, this is one of the most successful women’s soccer clubs in Denmark. The win wrote itself into the history books as the biggest loss for Brøndby IF since 2004 – beating a 404 match streak.

From the beginning of the game HB Køge was the most dominant team with tight manmarking, hard-hitting tackles, well-composed attacks, and great individual performances. Brøndby IF had an early chance in when they tested HB Køge-goalkeeper Stina Lykke with a header in the third minute. From there, HB Køge was in total control and dictated the tempo of the game. Brøndby IF was unable to settle in and handle HB Køge’s high pressinginspired soccer. After less than ten minutes the home team, dressed in pink Capelli Sport shirts to show support breast cancer awareness, already had their first couple of chances.

HB Køge had to wait 21 minutes before being able to celebrate what seemed to be written in the wind this Sunday: a goal. In a quick counterattack HB Køge’s experienced right back Julie Nowak moved the ball on the outside of Brøndby’s midfield. From here she used two touches to put in a perfectly weighted cross to the back post where Irish national team striker Kyra Carusa needed to just place the ball into the goal. Going forward, the home side had several chances to increase the lead and in the 37th minute the lead was extended through one of HB Køge’s trademark counter-attacks. American midfielder Kelly Fitzgerald got the ball at the middle of the field and with a deep pass found Kyra Carusa, who accelerated into the box from the left side of the pitch and with a hard right-footed shot found the back of the net and the newly promoted first tier club HB Køge went into the half time-talk leading 2-0 against one of the best teams in Denmark.

It was clear for everyone that Brøndby IF came into the second half with a plan of pressing HB Køge. The second half was only six minutes in, when Brøndby IF had their first chance but the former Danish national team goalkeeper Stina Lykke was quick to jump out and deflect the shot.

Just four minutes later the roar of celebration and pure joy was heard all over Capelli Sport Stadium as Maddie Pokorny went on a wonderful solo run getting passed three Brøndby players before hitting a perfect shot in the far right goal corner. 3-0. From this moment and to the final whistle it was all a matter of surviving for Brøndby IF. The hope was slowly fading for the guests and every last bit of faith seemed to disappear as Maddie Pokorny once again scored putting the ball passed goalkeeper Katrine Abdel and into the Brøndby goal.

In the final minutes and seconds of the game the substituted forward, Lærke Niklasson, ended the game in spectacular fashion as she made a clever run towards the goal, and finished superbly to close out the scoring for the day.

When the final whistle blew the players and fans knew they had experienced something special and out of the ordinary. History had been written on this sunny day in Køge at Capelli Sport Stadium and HB Køge Women were here to stay.

HB Køge is a Danish professional men’s and women’s soccer club based just 39 km southwest of Copenhagen in the historic waterfront town of Køge. The club was established in 2009 as a merger between Køge Boldklub and Herfølge Boldklub with the goal to develop one strong local soccer club. HB Køge is built upon a proud history – on both talent development and results. Follow the club and it’s hunt for glory and great talents at hbkoge.dk, Instagram (@hbkogewomen), Twitter (@hbkogedk) or on the teams Facebook page (@HB Køge Women).

Capelli Sport is an innovative sportswear and team wear brand focusing on design of the highest quality, latest fabric technology and design functionality for world-class performance on the field. For more information on Capelli Sport, current partners, and how to join the team SHOP CAPELLI SPORT, visit the ONLINE CATALOG PAGES at capellisport.com, follow them on Twitter (@capellisport) and Instagram (CapelliSport), or visit the Capelli Sport Facebook page.